On August 25th, 1696 Lima mint recorded its first delivery of gold coins. The amount that was delivered to mercader Joseph Marti was recorded as 32,979 dos escudos. Marti was not given 32, 979 two escudos coins, but gold coins in all denominations worth 32,979 dos escudos (the equivalent of 131, 916 pesos). Capt. Francisco Hurtado, taking office in 1696, is the only assayer of record that year. 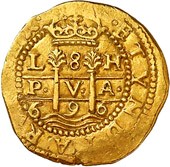 Mint records from 1696 do not tell us how many of each denomination were struck that year. There is way to estimate the size of at least the onza coinage. By a Spanish decree 75% of the silver mintage was to be coined as 8 reales, but there was no fixed ratio with the gold denominations. Eight escudos were always the bulk of the coinage. By the end of the gold cob coinage, they routinely accounted for 99.5% of the gold mintage. In the early years of the mint the percentage of gold struck as onzas was less than that and but still quite high. In the years for which we have complete records before 1704, onzas comprised between 80% and 93% of the gold coinage. If the mintage of 1696 fell into that same range, we can estimate between 6600 and 7700 onzas were struck that first year. With luck, that number of onzas could have been struck by one pair of dies. 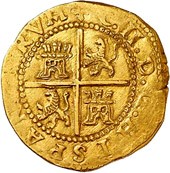 Three 1696 onzas are known to have survived, all struck from the same dies. A fourth example of lower grade is rumored. The finest 1696 onza is the Caballero coin pictured on this page. All 1696 are struck on big planchets (34-35 mm) with good central detail but weak legends. On the cross side the legend begins simply C.II. (instead of CAROLUS II). The cross for this year and this year only is a plain cross with no crosslets. 1697 begins a Jerusalem cross that remains with essentially no modification throughout the Lima gold cob coinage. The 1696 lions are rampant and reasonably leonine with long, wig-like manes. After the Fleet-era the style of the lions degenerates markedly until they look more like fleeing rodents. The castles are simply executed. The two eye-like windows in the barbican and the arched gate below suggest to some people a sad face. The barbican is topped by a crenellated, straight parapet and three towers. The crenellation begins to disappear about 1707 and the parapet becomes strongly curved in 1746. The towers, sometimes with windows flare outward, wildly so after the Fleet era. 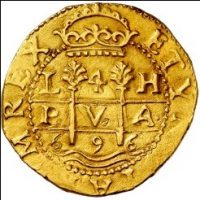 On the pillar side (technically the reverse) we notice a small crown with straight base. This Hapsburg crown disappears in 1702, replaced by a larger Bourbon crown with a curved base. (For some reason the small crown reappears on one die in 1709.) Two pillars with ornate capitals trisect the central fields. Usually, but not always in the Carlos era, the pillars descend into three waves. See the 1696 “short pillars” four escudos to the left. Two horizontal lines behind the pillars divide the center of the die into a register with nine spaces for letters and numbers. Mint mark and assayer’s initial flank the denomination in the top register (on onzas L—8—H), a three digit date is in the lower register (6—9—6), and the motto Plus Ultra is abbreviated in the middle (P—V—A). Notice the single dots in the middle register. Dots are apparently contagious because later, in Philip’s reign, all the letters and digits becomed dotted, sometimes doubly dotted. 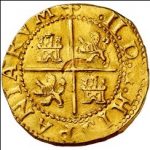 Just one 1696 media onza is known, but she is a beauty (despite a moon-shaped mark on the cross). Provenance unknown, but if you lick the coin, we are told, it will have a Florida ocean taste. Notice the “short pillars” that float above and do reach down to the waves. A beautiful full crown sits atop a central register with no significant doubling. The centering on the 27 mm planchet is excellent. With one more millimeter we would have space to completely show the legends. On the cross side the legend is almost complete. A weak strike at the beginning of that legend has reduced C.II. to .II.We don’t know why the plain cross was immediately replaced with a Jerusalem cross. It cannot have been on aesthetic grounds.

Three attractive 1696 two escudos are known, including a Florida State Collection coin (#1670). Perhaps the best of the three is a beach find several years ago that remains in private hands. The specimen pictured to the left was sold by Aureo in 2009. It is perfectly centered on a full-size planchet. The only problem is an area of weakest in the legend, mirrored by a similar area on the cross side. 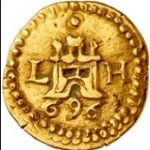 There is something or maybe several things we do not understand about the 1696 Lima mintage of one escudos. Two clearly dated (con fecha) specimens are recorded, one shown here. Notice the simple design with no superfluous elements. Mint mark and assayer flank a single castle, date below, and denomination, expressed by one dot, above. All the information that is legally required is clearly displayed. There also exist a pair of one escudo, similar in design on both sides, except none of the legally required information is present. These so-called sin fecha issues are not just without date but also without mint mark and assayer. There is no letter or digit of any kind on the coins. Four sets of three small dots surround the castle, whose design is similar to but not the same as the con fecha issues. We cannot believe that Hurtado and his teserero would be so foolish as to issue completely anonymous escudos. The price for being caught doing so could have been quite high. The most charitable interpretation we can put on the sin fechas that has them coming from the Lima mint is that they were patterns for the 1696 issue, or as many now think, for 1698 Cuzco coinage. There is also the problem that the two con fecha issues do not much resemble each other. A careful examination of the 1696 one escudos is in order to sort out the good from the bad.