Lustrous, well struck, mint state (NGC MS 61), and unique. No other 1737 Lima one escudo has survived from what was in fact an unusually large original mintage of 1609 coins. All Lima one escudos of Philip V’s second reign should be considered rare and high grade pieces very rare. From the entire eleven year period (1728-1738) of assayer Negron (N), a total of five one escudos survive, and this 1737 is the only mint state specimen.

The final style of Lima cob one escudos began in 1733 when three crosses/stars replaced the single star above the castle. The reason for this design change is not yet known, nor why it was suspended at the very end of the cob coinage (1750) for a strange one-year crossless design. On the reverse four large crosses/stars fill the angles of the central Jerusalem cross. Originally in the 1690’s there were simple dots in the angles, then small fleurs that gradually morphed into crosses, and finally the large crosses we see here. Neither obverse nor reverse on Lima one escudos had legends.

Though for some reason NGC has failed to note it, we should mention that a clear overdate 1737/6 is visible even to the naked eye. It is not surprising that after striking a total of 646 one escudos in 1736, those dies were still serviceable and redated for 1737. 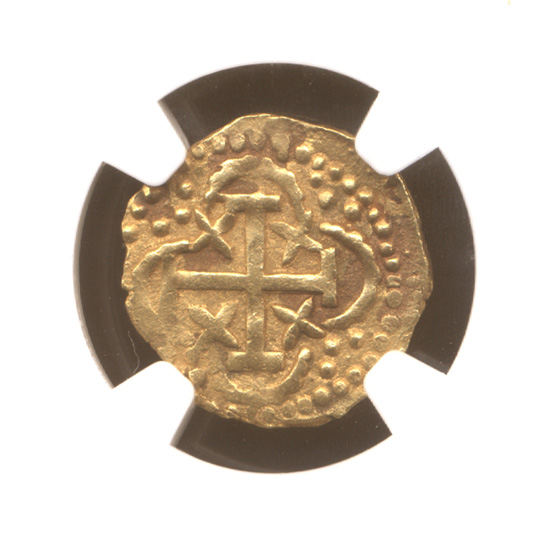