L.66 Viceroyalty of El Peru, mint of Santiago de Chile, 1750 J eight escudos. The first gold 8 escudos from this mint. Among the finest known (one MS 63 is recorded at NGC). Prooflike surfaces. Exceptionally well struck for this issue. NGC “MS 62 LA LUZ”. Recovered from the Uruguayan wreck of Nuestra Senora de Luz in 1992. 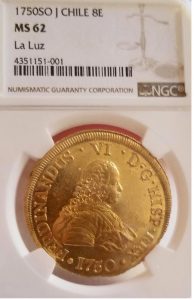 On October 1, 1743 the wealthy Chilean merchant Francisco Garcia de Huidobro bought the right to establish and run a mint at Santiago, Chile, on the condition that he assume all construction and operating costs. Construction of the mint was first delayed when the English captured his minting equipment in transit to Buenos Aires (the War of Jenkins’ Ear), and Huidobro had to ransom it. Construction began in Santiago in 1746 and was completed by September 1749. On September 10th the first coins were struck at Santiago, a gold coinage consisting solely of four escudos. Because of problems with the dies and with striking, no 8 escudos coinage was even attempted until the following year. 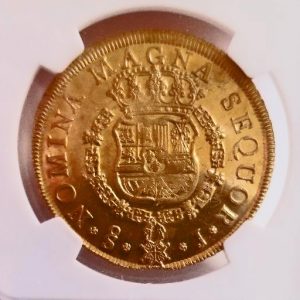 Many of 1749 four escudos were horribly struck. Huidobro was persuaded that the core of the problem was dies cut in too high relief. But the lower relief dies of 1750 did not solve the problem. Both the four and now the eight escudos continued to exhibit terrible strikes: the Bourbon shield was a mushy mess and Ferdinand looked like he had been scalped, wig and all. Only rarely, and apparently by accident, was a well struck eight escudos produced. The problem, it became clear, was not dies or malfunctioning presses, but coiners who were not familiar with the big new mechanical presses they were being tasked to operate. In particular, they did not know how to control the pressure of the strike. Too little or too much created large flat spots on the gold planchets. Eventually the coiners figured out the problem and by the beginning of 1751 gold mintage, well struck coins became the norm.

But for the recoveries off Montevideo Harbor from the unfortunate Nuestra Senora de la Luz, we we would know almost nothing of Huidobro’s struggles to launch his gold coinage. This 1750 J eight escudo represents a lucky accident in the troubled launch of the eight escudos coinage at the Santiago mint. 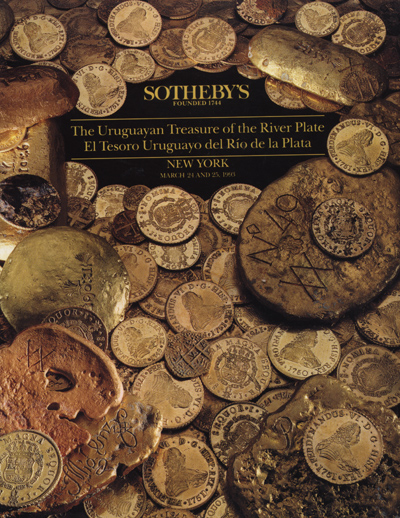