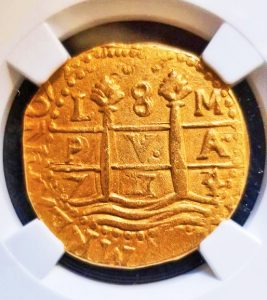 Before July 1988 the 1714 Lima onza was a virtually uncollectible date, represented by a single XF specimen. That July Moe Molinar and HRD recovered a small group from an unsearched area on Douglas Beach (the wrecksite of Ubilla’s fragitilla the Santa Rita). Most displayed a clear 1714/13 overdate, suggesting an origin in the March 1714 Lima mintage.

Surprisingly, several showed light circulation wear. We know from letters to Spain that Viceroy Ladron sent no treaure to Panama in 1714 to be picked up by Echevers’ fleet, so the 1714’s were a private merchant shipment. How they ended up leaving Havana in July of 1715 on a fragitiila of Ubilla’s Mexican fleet is far from clear.

An interesting common feature of the Fleet 1714/3 Limas is their faintly reddish tint, further suggesting a common source for the gold used in this early 1714 mintage. The non-overdate 1714 are very yellow gold, clearly from gold mined at another location. Mint records currently being searched may allow us to identify the particular Peruvian mine that is the source of the 1714/3 coinage. 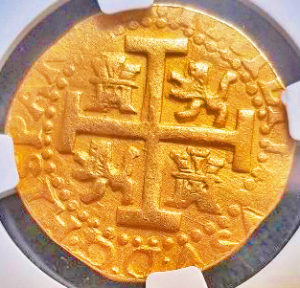 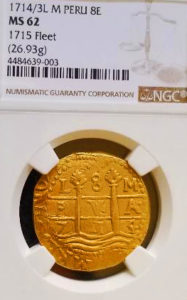