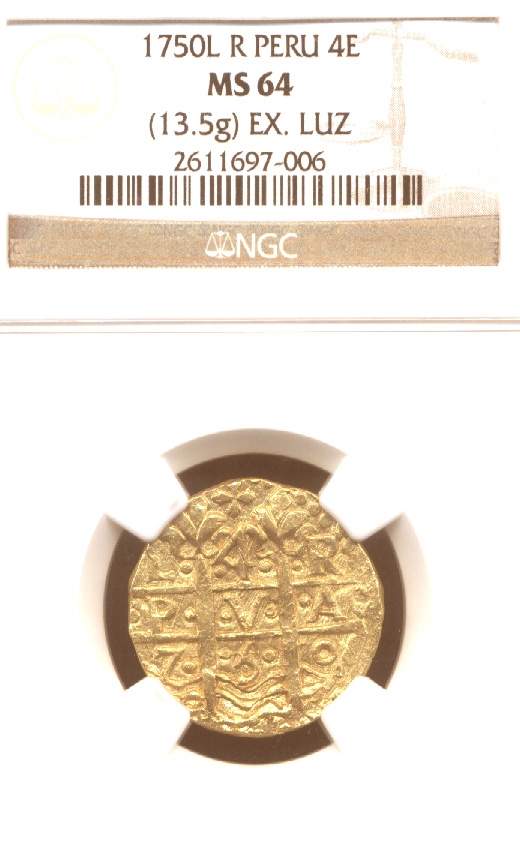 Before the discovery of “Our Lady of Light” in April, 1992, the 1750 Lima four escudos was not known to exist. Many numismatists believed this rare denomination had been discontinued as obsolete in 1740’s because only a single early 1740’s four escudos was known. The recoveries from the La Luz not only proved a 1750 four escudos mintage occurred, but also revealed that things totally unexpected and unprecedented transpired at the very end of the Lima cob coinage. Apparently a total mintage of 1530 four escudos were struck in four small deliveries spanning July through December 1750. Incredibly, seven cross dies and three pillar dies were used to strike these 1530 coins–and five of those cross dies were from off-denomination eight and two escudos dies. Besides being highly illegal to use off-denomination dies, this overuse of dies with a small issue makes absolutely no sense. The normal dies that we have for 1750 could have struck a 1530 mintage several times over. As it turned out, only about 40% of the mintage of 1750 media onzas were struck with normal four escudos dies. 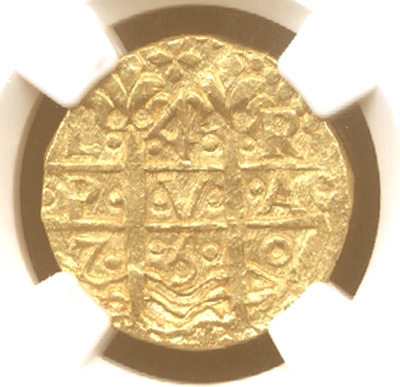 Within a year of finding of the treasure of the Luz, most of the coins came to auction at a 1993 New York Sotheby’s sale. The salvors of the La Luz were numismatists and quickly noticed something strange about the 1750 media onzas. They noticed, as we said, that seven different cross dies had been where one die would be normal and sufficient. Four of these cross die were 8 escudos dies featuring a huge 21 mm cross that barely fit the planchet. A single 2 escudos cross die was also used. But there is more to the 1750 cross die story. Our coin shows a unique treatment of standard Jerusalem cross: the uppermost crosslet is doubled as on the cross of Lorraine. This design never before had appeared on a Lima gold cob. This unique design was used to strike perhaps a few hundred coins.

The workmanship of the Lima gold cob dies in the era of assayer Rodriquez (R) and his predecessor Vargas (V) never approaches the fine quality of the Hurtado (H) or Megarejo (M) Fleet-era coinage. Designs features like the lions and castles are often crude in design and carelessly punched into the dies. The Royal Board of Coinage repeatedly demanded that Lima improve its gold coinage. The new Superintendent, Andres de Morales, clearly made an effort to respond to this criticism with the normal dies coinage for 1750. This 1750 four is struck from one of the two (probably three) sets of normal dies he had prepared for 1750. The pillar die is from a conventional Lima four escudos design. The cross die features a Lorraine-style cross with doubled upper crossbar. Four unconnected tressures arc above the lions and castles in a reales-style seen only in 1750. Fifteen 1750 fours of this die combination were found. This coin is the highest graded 1750 four escudos and, because of its exceptional luster, centering and strike, the highest graded four escudos for the entire final 50 year period (1701-50) of the Lima cob coinage.