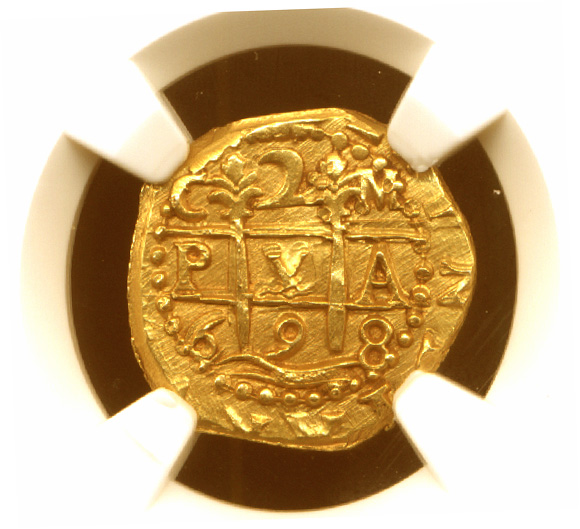 Lustrous, well struck, well centered, and choice mint state. Quite rare in this condition as the vast majority of this one-year issue exhibit serious striking and planchet problems.

The full story of the failed gold mint at Cuzco (1698-99) hides in the archives of Spain and Peru. We know some of it. After receiving dies from Lima in May of 1698, Cuzco proceeded to strike what we believe was a fairly modest first issue. This first mintage is confirmed in an August letter to the virrey. Shortly thereafter serious riots broke in Cuzco involving calvary guarding the incomplete mint. This disturbance apparently put minting activity on hiatus until late in the year, when one or two mintages were undertaken in some haste. This we have from a January 1699 letter mentioning “dos labores” just completed.

After that, we hear no more until July of 1699 when the mint building was finally completed–only to be put up for sale and sold within a month. A small quantity of gold remained at the mint in August and this was coined soon thereafter before all minting activity ceased permanently. It seems likely that this last small mintage in the fall of 1699 used 1698 dies. What we can conclude from this account is that it had apparently become clear in early 1699 (if not late 1698) that the Cuzco gold mint was not a viable institution. What forced this conclusion is a topic for a longer essay. 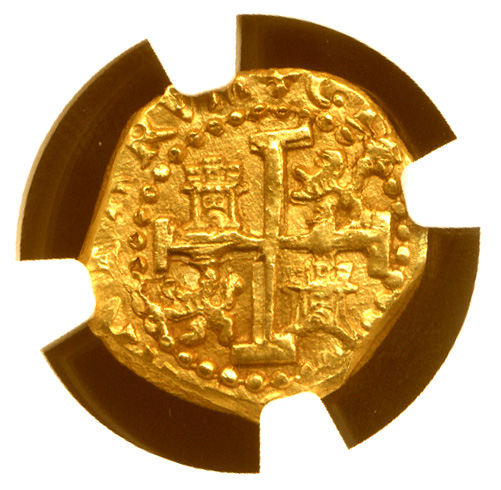 But for the specimens found on the 1715 Fleet, the 1698 Cuzco two escudos would be an uncollectible coinage. Before 1964 numismatists knew of exactly one 1698 C M two escudos, whose attribution to Cuzco was widely doubted. The Fleet coins forced numismatists to acknowledge a Peruvian gold coinage at Cuzco, though why a Fleet lost in 1715 would be carrying dozens of gold coins from an ephemeral Carlos II mint remained a puzzle. 1698 Lima two escudos recovered from the Fleet total two coins, from what we believe was a larger mintage at Lima.

Our study of the Cuzco two escudos identifies three cross and five pillar dies used in the coinage, most of which were clearly made in Lima. The well-engraved pillar die used here is a Lima product, but compare it with the cross die. The cross is malformed. The castles and lions are badly positioned, which caused premature die failure as they became attached to the cross. The beaded inner border is irregular.

We seem to have a cross die prepared in Cuzco by a very inexperienced die cutter muled with a professionally prepared Lima pillar die. The planchet is remarkably round for Cuzco, the strike and centering are excellent, suggesting that at least those parts of the mint operation were operating satisfactorily. 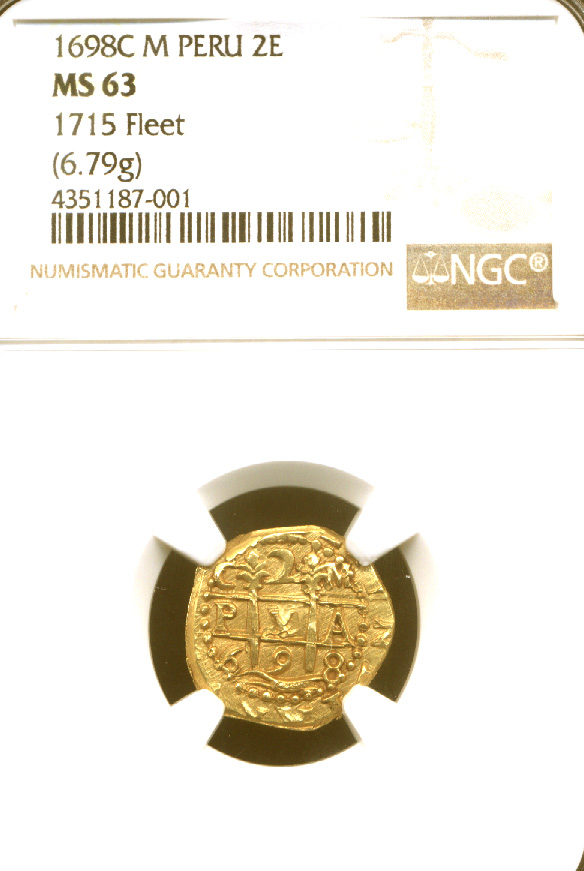