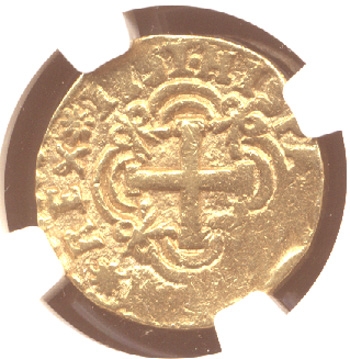 C72. Nuevo Reino (modern Colombia), mint at Santa Fe de Bogota, 1751 FS four escudos, very rare (two known, this one the best and the only one fully dated). Large planchet for these compact final issues, which are almost always weakly struck. Reverse of 1751-52 with bold REX 1751 HISPAN in the upper legend. NGC XF 45

The entire Bogota gold coinage of 1751 is known from four dated coins: two eight and two four escudos. Original mintage is unknown, but likely very small. Santa Fe was the last Spanish Colonial mint operating under a private treasurer (tesorero) and striking cobs. Manual de Porras was the last teasurer at Santa Fe (1749-53). The Colonial treasurers had successfully resisted Philip V’s 1730 order to mechanize and convert to a milled coinage, but Ferdinand made it a priority to get the last Colonial cob mint, Santa Fe, to finally modernize and convert. To accomplish that, he revoked Porras’ treasureship in 1753 and made Santa Fe a royal establisment under a Superintendente appointed by the king. 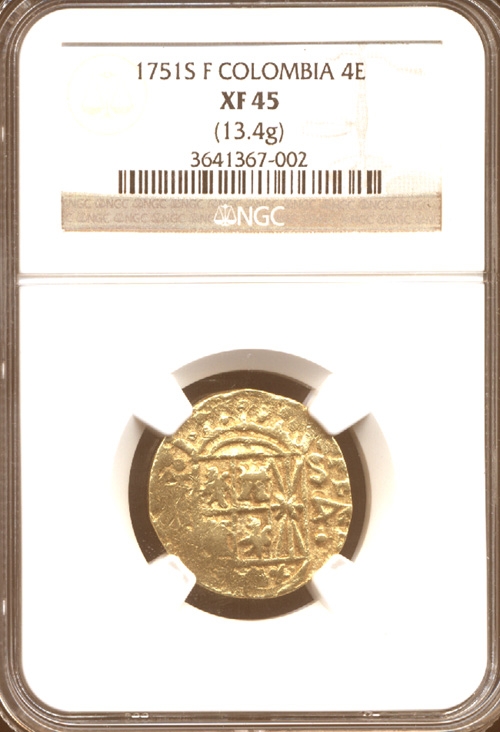 Four escudos are believed to have struck at Santa Fe from 1743 to 1755 or 1756, though several of these dates are unknown. No census of the four escudos complements Kent Ponterio’s fine monograph on the final years (1743-56) of the 8 escudos coinage, which found 18 dated onzas in total to have survived. The surviving population of dated four escudos is likely about half that, making the Santa Fe media onzas one of the rarest Spanish Colonial gold series.