The Last Gold Cob Struck in the New World

The Last Gold Cob Struck in the New World 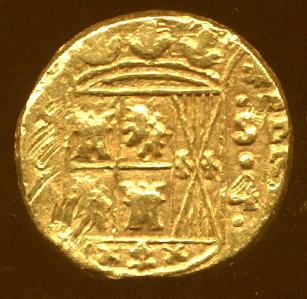 C73. Nuevo Reino (modern Colombia), mint at Santa Fe de Bogota, 1755 FS four escudos. Unique. The last dated media onza known from the Santa Fe mint and the last known mintage of cob 4 escudos struck in the New World. Plate coin in Restrepo’s COINS OF COLOMBIA pictured as M96-9 (p. 104). AU, full cross and tressure in the unique style of 1755, complete shield and most of the crown. Clear REX * 1755 in the cross side legend. Full weight at 13.52 gm. Some scratches to the left of the shield.

In 1755 the new Superintendente of the Santa Fe mint, Miguel de Santistevan, finally began the conversion to a milled Portrait gold coinage, a conversion the Crown had first ordered in 1730 and the Santa Fe treasurers had vigorously resisted. Both cob and milled 4 escudos were struck in 1755, probably more cobs than milled pieces, but both in very small numbers. This coin is the only dated cob four to have survived and a lone milled 1755 four is also extant, the Eliasberg coin that sold for $103,500. Santistevan had come to his new position at Santa Fe in 1753 with a royal mandate to mechanize and convert to a milled coinage as quickly as possible. Ferdinand, like his father before him, was apparently embarrassed by the old-style irregular cobs and dissatisfied generally with the quality of the gold cob coinage. In 1753 he revoked the treasureship Manuel de Porras had held since 1749 and made Santa Fe a royal establishment under a Superintendente appointed by the king. 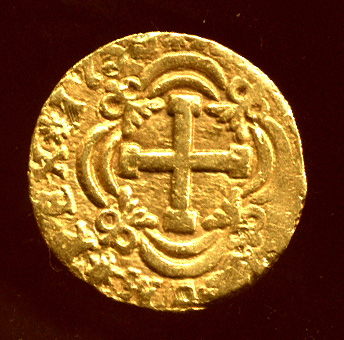 Four escudos are believed to have struck at Santa Fe from 1743 to 1755 or 1756, though several of these dates are unknown including 1756. No census of the four escudos complements Kent Ponterio’s fine monograph on the final years (1743-56) of the 8 escudos coinage, which found 18 dated onzas in total to have survived. The surviving population of dated four escudos is likely about half that, making the Santa Fe media onzas one of the rarest Spanish Colonial gold series. This solitary 1755 media onza is the last of its kind.