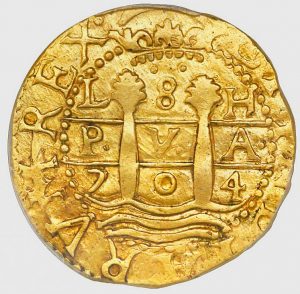 A lustrous, choice near mint state example of one of the rarest Fleet dates. Very round planchet with boldly struck cross, “whigged” lions, and castles. Bourbon crown. PCGS AU 58 1715 Plate Fleet. The second highest 1704 graded at NGC and PCGS and by far the best centered. Ideal for a date set. SOLD

Our census of 1704 Lima onzas records six collectible specimens plus two impounded in the Florida State Collection. Of the six collectible specimens, four have Fleet pedigree, all (including this coin) found on the Douglass Beach site (Ft. Pierce, FL). 1704 Lima onzas were clearly not fresh from the mint in 1715. Most 1704 onzas show more than modest circulation. This coin is the fortunate exception, apparently set aside in 1704 to become part of the merchant hoard of some wealthy Peruvian returning to Spain in 1715. 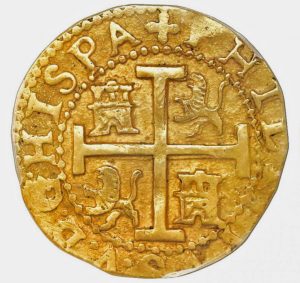 Notice the “whigged” manes on the lions. Some say this makes them resemble English barristers! This design features disappears on Lima lions after about 1719, and, due to poor striking or damaged dies, cannot be seen on the vast majority of earlier Lima onzas. Notice also the monarch’s name PHILIPPUS visible in the legends to the left of the cross, another feature often lacking on smaller planchet Lima onzas (the onza die was 35.5 mm in diameter). 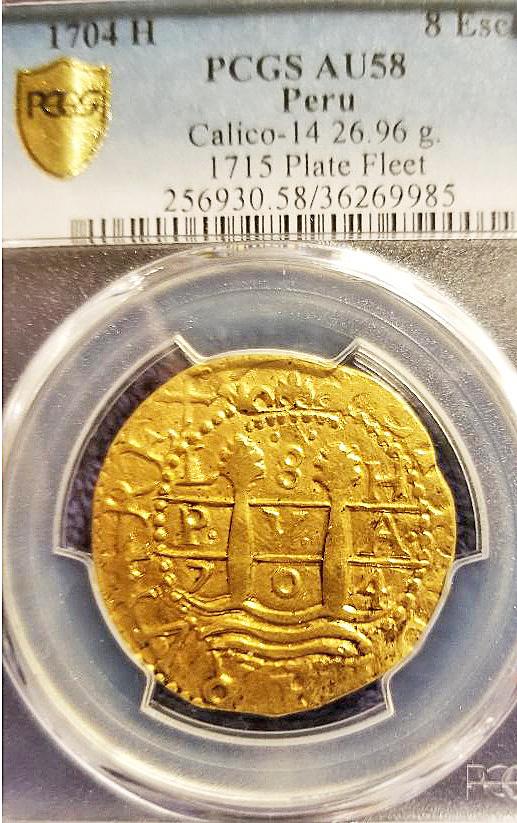