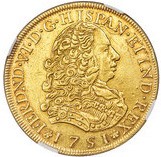 1750 was the last year gold cobs were minted at Lima. Superintendente Morales had promised Spain to begin striking the new milled portrait escudos in 1751, and no new cob dies were authorized or prepared for 1751. In July 1752 Morales reported he had managed to strike nearly 14,000 marcos of round gold coins in 1751. In 1751 Lima delivered gold on August 4th, November 20th, and December 22th, totaling 13,863.5 marcos. Close enough to 14,000 marcos! So Morales in July 1752 reported that the entire 1751 gold mintage was in Portrait coins.

Several recent accounts of the beginning of the Portrait gold coinage have questioned Morales’ report and argued that it was impossible that his 1751 gold coinage was all or even mostly Portrait escudos. Their argument is that Morales had no Portrait dies to strike gold at least until late 1751. Morales had allegedly been promised new Portrait dies by Spain in December 1750, but the dies did not arrive until October 31 and then were declared to be too corroded to use. So, according to this account, it is impossible that the August gold emission was struck from Portrait dies and nearly impossible that the November 20 coinage was struck from Portrait dies very quickly fabricated in Lima. Just possibly Lima managed to fabricate Portrait dies for the late December mintage, but certainly the August mintage and very probably the November mintage were struck from what he had at hand: 1750 cob dies.

The challenge to Morales’ account rests on several misreadings of the documents and false assumptions. A clear account of the events of 1750-53 can be found in legajo AGI Lima 1261. First of all, Lima was not promised dies in December 1750 but rather matrices and punches. Morales’ development of the Portrait coinage did not await instruments from Spain. Morales during his “training period” in Mexico in 1748 had retained the services of a skilled die engraver, Don Jose de Zuniga. He had commissioned Zuniga to create “multos cunos” for the new coinage, dies he took with him to Peru, initially perhaps mainly for training purposes while he awaited the new matrices from Spain. Zuniga‘s dies proved to be of high quality, and on May 15th 1751, Morales was moved to share a few samples of the new gold coinage with Spain. Two days earlier he had written he was now able to undertake the new gold coinage with his dies and the installation of a mill and 3 coinage presses. 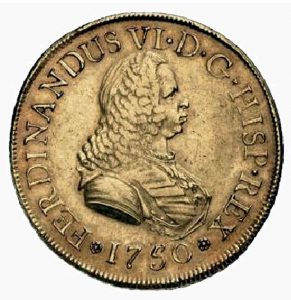 On November 20th Morales explained to Spain that despite damage to the matrices that had arrived on October 31st, he would be able to carry on the gold coinage with his own “Mexican” dies. In a separate communication on the same day he send the Marques de la Ensanada two six coin sample sets of the new gold and silver coinage, requesting that they be shown to the king if the Marques approved. In the summer of 1753, Morales received a reply from Spain, dated May 21, containing a mixed review if his coinage, and a promise new matrices and punches would be send. Surprisingly, Spain did not criticize Zuniga’s portrait of Ferdinand, which was not the portrait the king wanted to see on his gold coinage. The approved portrait of Ferdinand, shown to the left on a Madrid onza of 1750, does not closely resemble Zuniga’s portrait. The damaged matrices received on October 31st had this portrait, and if usable, would have graced the Lima gold coinage from late 1751. As it happened, Zuniga’s portrait appeared on the gold coinage until the end of 1753.