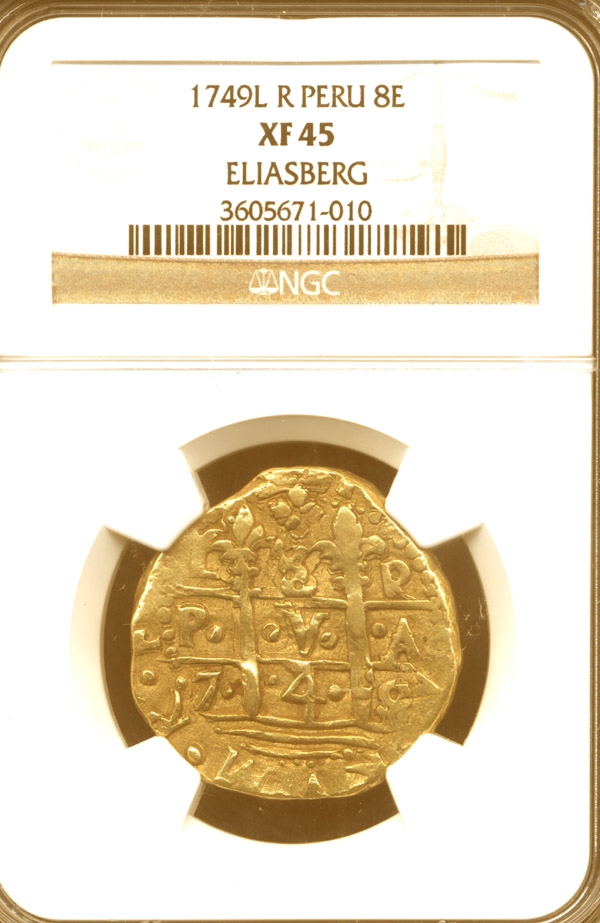 A unique double overdate from the famous Eliasberg Collection. It was very rare for onza dies to last into a third year of production, but the unexpectedly large gold mintage (1,574,452 pesos) of 1749 forced the Lima minters to call back into service dies that had been retired.

The Lima gold coinage of 1749 is a wonderfully complicated story. In May of 1748 a new superintendent of mint, Andres de Morales, arrived in Lima and took charge of a mint still in ruins after the earthquake of October, 1746. Besides rebuilding the facility, Morales had two other urgent pieces of business. Fernando had ordered Morales to convert Lima from a cob to a milled coinage as quickly as humanly possible. Fernando’s father, Philip V, had ordered the colonial mints to convert to milled coinage in 1728. Twenty years later Lima was still striking cobs. Morales was also ordered to immediately address of a quality problem with the Lima’s often illegible cob coinage. Since at least 1742 the Royal Board of Coinage and Commerce had been highly critical of Lima’s cob coinage. A report that arrived at the same time as Morales threatened to fine and dismiss mint officials because of the abysmal quality of Lima cobs.

Morales had special powers and the full support of the new viceroy, Manso de Velasco (a hero of the 1746 disaster). Changing the designs of the coinage was a strictly held prerogative of the monarch, but in 1748 Morales and the viceroy decided that the only practical way to quickly address the complaints of the Board of Coinage was to change the design of the cross side, duplicating on that side assayer, date, mint, and denomination. More about the redesign is here. Morales also had to deal with a demand for gold coins that 20-25% higher than expected. Dies retired in 1747 and 1748 were un-retired and redated for service in 1749. The Eliasberg onza dies, uniquely, had been used in both 1747 and 1748 (tauler 564a = tauler 558). 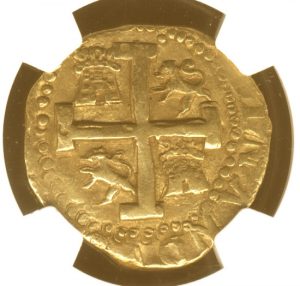 Notice the design of the cross side castles. From 1746 to 1749 Lima used almost exclusively a new design of castles that I call the “smiling” castles. In previous years a straight unadorned parapet had been topped by three wildly flaring turrets. Beginning in 1746 the parapet became curved and “jeweled” with 5 windows. The base of the castle had more detail and turrets were engraved in a more restrained fashion. For some reason this style of castle was abandoned in 1750, the last year of Lima gold cobs.