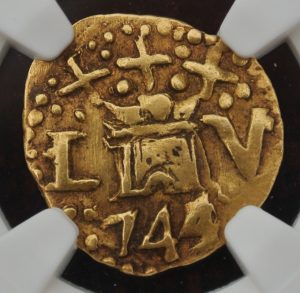 One of two coins known to have survived from a reported mintage of 993 (the other coin is not an overdate). No Lima escudos dated 1741-43 one escudos survive to confirm it, but these dies were probably in service for the better part of four years. NGC XF 45 (and calling the double overdate on the insert).

Three crosses (or stars) interspersed with 8 or 10 dots is an castle side design Lima adopted in 1733. We don’t know why. By the assayer Vargas era (post-1738) the quality of all design elements had deteriorated markedly. Again, we don’t know why. Spain complained to Lima that their escudos were often badly engraved, horribly struck, and completely illegible. Lima replied that poor wages and working conditions made it impossible to recruit a quality work force. No resolution was achieved and Philip V moved ahead with converting the mint into a royal office. 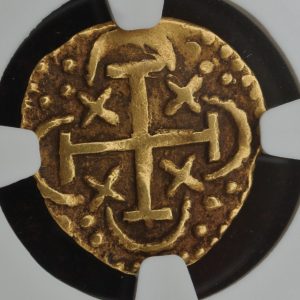 We should say something about the distinctive brown-red marine deposits on this coin. They suggest an interesting provenance (for which, I hasten to add, we have no proof). On October 28, 1746 an 8.7 M magnitude earthquake leveled Lima and spawned a tidal wave that obliterated Lima’s port, Callao, and its 5,000 inhabitants. A large fleet in Callao’s harbor was also completely destroyed. Modern salvages in the harbor and in the old city occasionally turn up a few gold and silver coins, usually with 1743-46 dates. The muddy brown-red deposits/patina we see on those Callao coins is exactly what we see here.