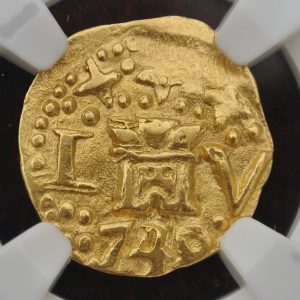 This is the only 1740 one escudos known to have survived from a reported mintage of 561. Mintages of one escudos in the first years (1739-43) of assayer Vargas (V) were very small, and this is in fact the only one escudo known for that four entire year period. The overdate is no surprise: these same dies may have been kept in service until 1743. NGC AU 53.

Before 1716 Lima one escudos featured only dots above the castle, at first one, then three dots. In the redesign of the Lima gold coinage in 1716, a large cross (perhaps representing a star) was placed above the castle. Two rows of four dots arced to the right and left of the cross. This lasted until 1733 when another redesign placed three crosses above the castle with eight dots interspersed. By the Vargas era (post-1738) the quality of the design elements had deteriorated further. Castle and crosses (stars) are cruder still. Ten stars now seem interspersed among the crosses in no particular pattern. We have argued elsewhere that the redesigns of 1716 and 1733 were not capricious, though an explanation of them has yet come from archival research. A second issue is the striking decline in the quality of Lima gold issues in the 1730’s and 1740’s. Spain complained to Lima that their escudos were often badly engraved, horribly struck, and completely illegible. Lima replied that poor wages and working conditions made it impossible to recruit a quality work force. No resolution was achieved and Philip V moved ahead with converting the mint into a royal office. 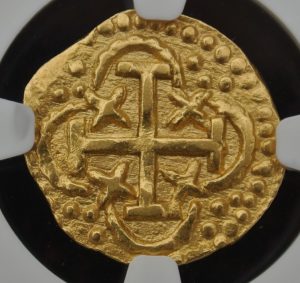 The reverse is virtually mint state. It shows a fairly symmetric cross, but with crude tressures and large ill-shaped crosses (stars) filling the angles of the cross. A measles-like proliferation of dots adds another nine dots in the fields above of the tressures. As I’ve said elsewhere, a comparison with the simple and elegant design of Fleet-era escudos leaves one lamenting the decline of the Lima mint.