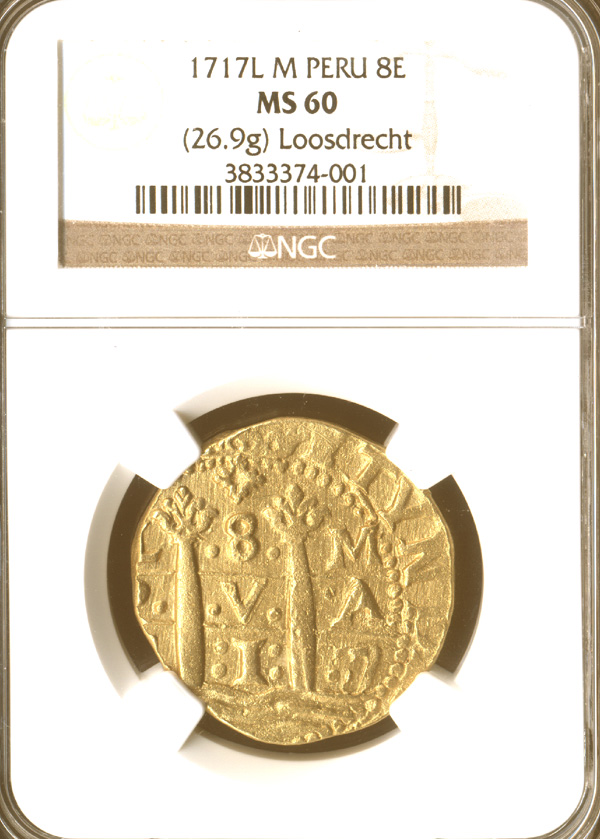 Ten examples of the 1717 Lima 8 escudos are known. Seven of the ten, including this coin, use holdover “Tearful Cross” reverse dies from 1716, arguing again that the “Tearful Cross” issue was originally designed as a one year only memorial coinage (see below). The other three 1717 onzas show simple dots flanking the ends of the cross. On the obverse the big change is that the dotted horizons of 1716 return to two solid lines, and the profusion (some say plague) of dots around the central letters and digits settles into a calmer 4-4-8 pattern (4 dots around L-8-M, 4 dots in the middle P-V-A register, etc.) . The large star above the 8, introduced in 1716, remains and in fact becomes a permanent feature of the Lima coinage for the next 35 years.

On-going research is beginning to solve the mystery of Lima’s 1716-1717 re-designed gold coinage. Spanish Colonial mints did not lightly or capriciously re-design their gold coinage. This was the prerogative of El Rey, and woe to any viceroy or lesser mortal who without full authorization fooled with the long-accepted designs of the coinage. The one acknowledged exception was a brief memorial issue that only slightly modified the basic design. In 1746 the new Lima viceroy Velasco ordered many small stars added to the 4 and 8 escudos dies. This was in memory of the beloved Felipe V, who died in July after ruling for more than 45 years. Stars were a traditional memorial motif on Roman gold when the name or image of a deceased emperor was displayed (see the ‘divus’ issues of Julius Caesar). Alternatively, or perhaps as well, the 1746 con estrallas issues also remembered the victims of the Great Earthquake (and tsunami) of 1746 that totally destroyed Callao and wrecked much of Lima with great loss of life. The star motif would promise a “new Lima” would arise from the ashes of the old. 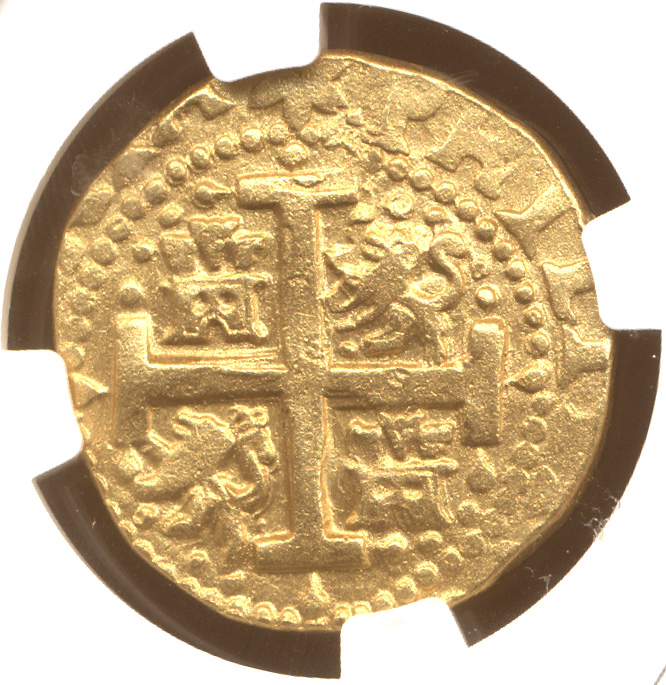 The iconography that drives the view that the issue of 1716-17 is a memorial coinage is the profusion of tears emerging from the ends of the cross at 12 locations. These are not decorative dots, but carefully formed tears (or, one scholar believes, drops of blood) emerging from the cross. A tearful or a bleeding cross is a traditional Latin motif of mourning and remembrance.

No change in the weight or fineness of the coinage occurred in 1716. No monarch died in 1715-16. No natural disasters like the Great Earthquake of 1746 befell Lima in the years immediately preceding 1716. No serious outbreak of the plague or other depopulating epidemics are known to have afflicted Lima in 1714-16 (though plague was known in Lima in this period). What tragedy, then, with serious loss of life could the 1716-17 coinage of Lima be remembering? What persuaded Philip’s viceroy, the pious Bishop Diego Ladron, to order a brief modification in the gold coinage? The only tragedy known to the historical record that fits this time frame is the loss the 1715 Plate Fleet in the previous year. No archival evidence yet confirms this, but no other explanation for the memorial issues of 1716-17 even suggests itself.