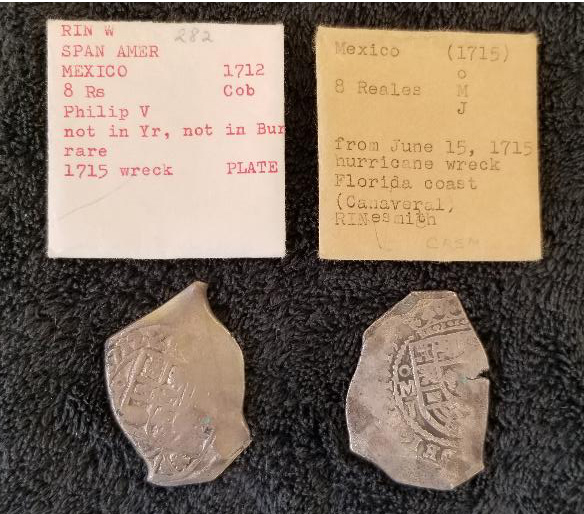 Mexico 1712 8 reales, the first 1715 PLATE FLEET coin from Real 8 at auction with its original Christensen San Cristobal 1962 flip, plus a Mexico 1715 8 reales sold privately at the same time. [SOLD]

We all know of the first spectacular gold finds made by Real 8 in May of 1964 at Douglass Beach. One hundred of those escudos were promptly auctioned in October by Henry Christensen to benefit the needy partners of Real 8. But before Real 8 struck gold, it had been working the Cabin Wreck site for 3 years, finding some silver and artifacts but no gold. In January of 1961 Real 8 found its first large clump of silver, yielding hundreds of reales in fine presevaton when broken up. Like many treasure hunting companies, Real 8 had no idea how to market their finds. Everything went in the bank and they continued to struggle to cover operating costs. Kip, however, in the course of his research had made some good contacts in the numismatic world, pre-eminent among them the scholar Robert I Nesmith. Nesmith immediately proved critical in identifying and authenticating the very rare Mexican silver cobs Real 8 was fnding. Collectors and dealers had never seen anything like the coinage Real 8 was now wanting to sell. Nesmith gave Real 8 a letter of authentication to accompany their coins, and in the spring of 1962 went one step further. He persuaded the auctioneer Henry Christensen to offer a small sample of the Real 8 silver with an introduction by Nesmith himself.