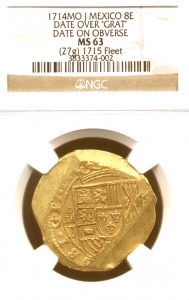 Nueva Espana, mint of Mexico City, 1714 J eight escudos. The rarest and most curious of the 1714 varieties, in which the date was removed from the reverse and re-engraved over GRAT in the obverse legend, creating the overstrike 1714/GRAT. Lustrous and choice mint state. Certainly one of the finest examples. NGC “Date Over Grat Date on Obverse MS 63 1715 Fleet” (none higher at either service). An important coin for the collector of high quality Mexico onzas.

At the beginning of 1714, the Mexican gold cob coinage underwent its last major redesign. The shield was simplified, completely omitting among other things the pomegranate of Granada and the lower castle. The cross revert to a simple  cross potent surrounded by a large Spanish-style quadrafoil tressure. The new working tallador, Hipolito de Sarmiento, who engraved the first dies of 1714 did a fine job, except that he placed the date Spanish-style above the cross on the reverse.  When samples of the new design where shown to the  viceroy and High Court, they noticed a small problem: most of the coins showed no date at all! Unlike on the machine-struck Spanish gold issues, where uniform pressure had no problem striking up a date in the cross side legends, hand-struck Mexican issues rarely managed to strike up much of cross side legends. Fernando de Alencastre, Duke de Linares, Viceroy of New Spain, was not pleased with dateless gold coins and ordered the mint to remedy this at once. 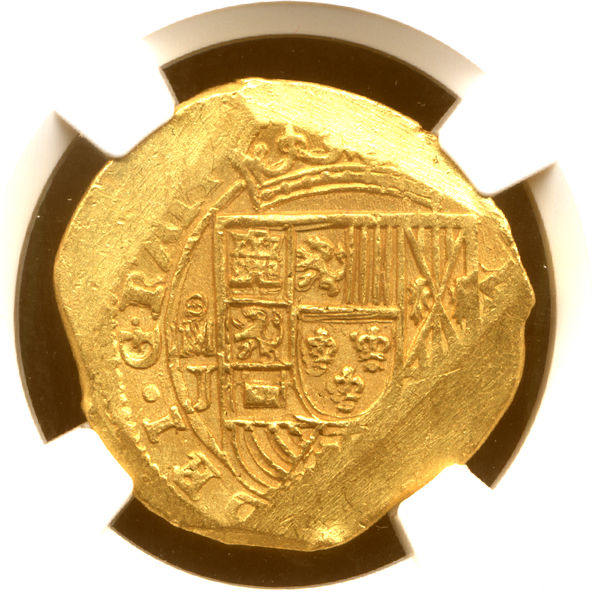 Here the story gets interesting. Rather than discard the expensive and still almost new dies, the mint decided to try to fix the dies. This should have worked, since all it required was effacing the reverse date and punching 1714 on the other side where it should be, erasing the GRAT that was now in its place.  Unfortunately, the tallador either did not understand these directions or just got lazy, and instead of neatly erasing GRAT from the legend, the tallador simply punched 1714 right over it, perhaps counting on the overstriking itself to erase the GRAT. The result was a messy, nearly illegible jumble of letters and digits. Making matters worse, the 4 of the date was punched in lightly. New coins were struck with this 1714/GRAT fix and presented to the viceroy.  Alas, we have no record of what the viceroy said when he saw what the mint had done, but judging by the rarity of the 1714/GRAT variety,  he immediately ordered this die permanently retired.

The rarity of the Date over GRAT variety is attested by the fact that the State of Florida records none amongst its 1168 coin collection of Mexican gold cobs (perhaps one or two partial 1714/GRAT lie unrecognized in the vast collection). Most major collections have lacked a full 1714/GRAT specimen. Real 8 did not understand the variety it called “very rare” at first.  The Caballero collector was fortunate to acquire a better example from them. Among the ten or so specimens Real 8 auctioned between 1964 and 1977 only two show a legible 1714/GRAT. In the last 30 years I have encountered four specimens with complete 1714/GRAT (including the two coins just mentioned). One of these sold privately at the time of the last Eliasberg Sale for more than $20,000. 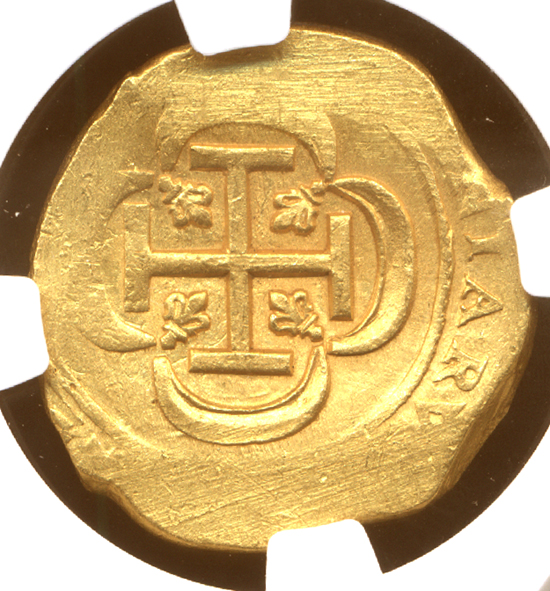