One of two known survivors from a reported mintage of 474. First year of the unexplained change to the Three Crosses design, which lasts until the end of the gold cob mintage at Lima. Noteworthy 19th century pedigree to Arthur Huntington Collection, which was donated en masse to the Hispanic Society of America in 1905. There it remained for 108 years (inv # 10984) until the Morton-Sotheby’s sale of the collection in 2013. As lot 429 it realized $3525. NGC XF 45.

Before 1716 Lima one escudos featured dots above the castle, at first one, then three dots. In the redesign of the Lima gold coinage that happened in 1716, a large cross (perhaps representing a star) was placed above the castle. Two rows of four dots arced to the right and left of the cross. This lasted until 1733 when another redesign placed three crosses above the castle with eight dots interspersed as you see. Six additional dots were placed in the lower fields bracheting the date. This busy design last until the end of the gold coinage in 1750 (actually 1751). No explanation for these redesigns has yet come from archival research. Spanish mints did not change their gold coinage capriciously. Certainly the 1716 redesign was motivated by some important event, as likely the 1733 redesign. By the way, the castle on the one escudo is about 8 mm high. The castles on 8 escudos are a little more than 5 mm. The punches for 8 escudos castles were not used for one escudos (as several writers allege). Initially the castles on one escudos were finely engraved, but by the time of assayers Negron (N) and Vargas (V) the style had degenerated considerably. 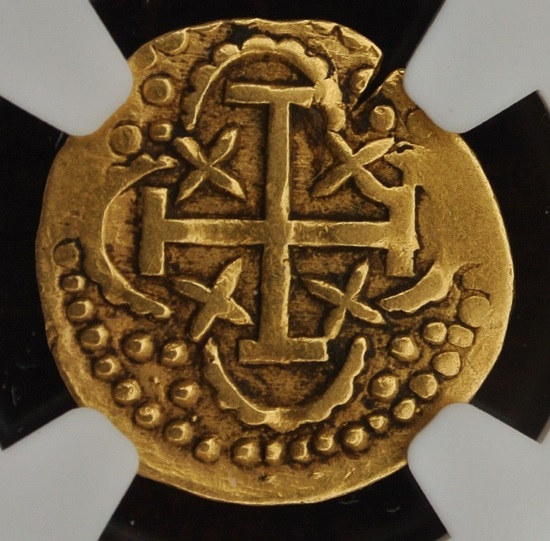 The reverse shows a well reasonably symmetric cross, but with crude tressures and large crosses (stars) filling the angles of the cross (this was part of the redesign of 1716). A measles-like proliferation of dots adds another nine dots in the fields above of the tressures. A comparison with the simple and elegant cross design of the Fleet-era coins leaves one puzzled about the aesthetic judgment of the Lima die cutters.