The Illegal Cartagena Mint of 1655

The Illegal Cartagena Mint of 1655 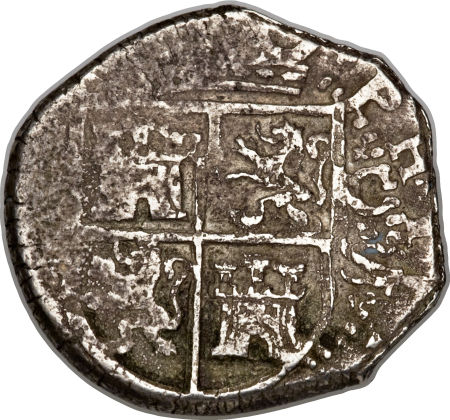 An illegal issue struck after June 21st, 1655 for several months on the orders of Cartagena Governor Zapata. Very rare. Three collectible specimens are confirmed, plus a damaged coin de-accessioned from the Florida State Collection in 2001. The Florida State Collection retains three specimens, all from the Jupiter Shipwreck (1659) site. All the Florida State coins, plus the Marex-Ullian specimen, found in 1991 on the Maravillas (1656) site, show corrosion and heavy circulation wear. Two of the three collectible specimens are non-salvage coins: the present coin, which pedigrees to the Isaac Rodman Collection via Cayon, and a specimen pictured in Calico’s Numismatica Espanola. This, the Isaac Rodman coin, is the only 1655 four reales seen by the grading services and competes favorably with the Calico coin (not seen in the marketplace in 50 years) for the title of finest known.

The illegal Cartagena coinage of 1655 was a direct result of the Potosi mint scandal of the 1640’s. In a decree of December 22, 1650 Philip IV mandated a new style of coinage throughout El Peru and banned the circulation of debased previous Potosi issues. When the Governor of Cartagena received that royal decree the following summer, he ordered that old style Potosi silver (except for one and two reales) could not circulate in his city after 1651. With no replacement coinage arriving in Cartagena from Santa Fe or Potosi, commerce was immediately impacted and Cartagena applied to Philip IV to re-open its mint. Philip denied this petition in 1653, but the new governor of Cartagena, Don Pedro Zapata de Mendoza, again petitions the king for a mint in April of 1654. With no answer in hand by June of 1655, Zapata decides the situation is critical and, though lacking any authority to do so, orders the mint re-opened to strike a silver coinage. Coinage commences on June 22nd under treasure Juan de Somovilla Tejada and assayer Salvador de Caceres (assayer mark S). On July 9th Zapata receives a royal order sent the previous September. Philip forbids Zapata to re-open the Cartagena mint and demands that any mint that has been opened illegally be closed immediately. Zapata orders Tejada to close but gives him until August 4th to clear existing silver deposits. In a apologetic letter Zapata writes to Philip in April of 1656, the Governor says approximately 25,000 pesos of coined silver were struck the mint between June 22nd and early August of 1655. 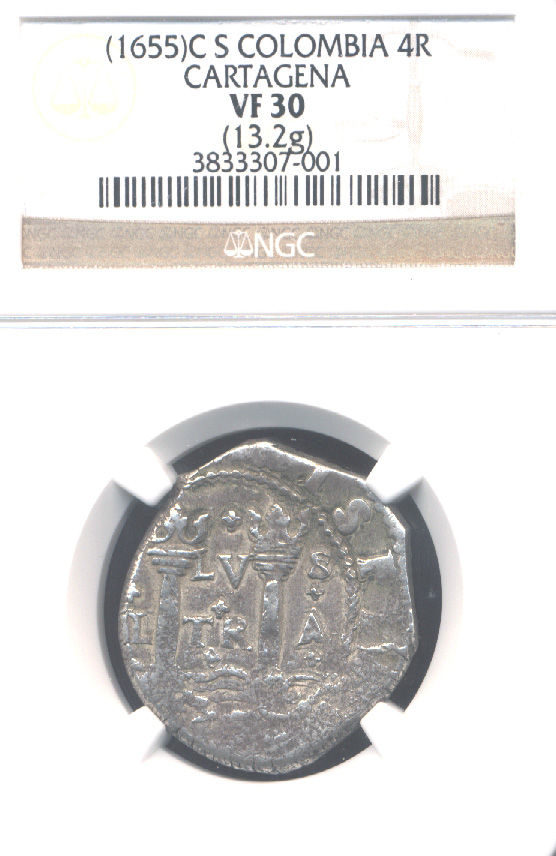 In August of 1657 Philip orders an investigation of the Cartagena mint. Although the investigation uncovers multiple illegalities, neither Zapata or Tejada are prosecuted. Tejada cannot find records for the 1655 coinage, though deposit logs show him accepting silver as late as September of 1655 in amounts that may total to more than three times the 25,000 pesos Zapata reports to the king. Tejada does not surrender the 30 shield and 15 pillar dies he has until April 22nd, 1656, leaving open the possibility that Tejada continued to strike 1655-dated reales into 1656. Tejada made it impossible for us to know the size of the 1655 coinage, but he certainly was die-capable of a coinage much larger than the mintage Zapata reported.

Heritage’s sale of the Isaac Rudman Collection featured this rarity. The black & white photos above are courtesy of Heritage. The catalogue attribution by a distinguished Latin American numismatist is worth quoting in some detail:

“The coin has an overall very attractive appearance with the pillar side being particularly nice…. After having its mint closed by the crown in 1635, the Cartagena province suffered from the lack of circulating coinage. This state of affairs worsened after the Potosi mint scandal of 1649-1650. Since the mint’s equipment was still available, the local Cartagena authorities decided to resume the mint’s operations in 1655 although the corresponding permission had been denied several times by the crown despite numerous requests. The history of that illegal coinage…was documented by Proctor and Blanton [in] their article The Illegal Mint of Cartagena, 1655 in NI Bulletin January/February 2012. We thus know that it only lasted for a few months beginning on 21 June 1655, which in turn accounts for the rarity of the produced coins, which ranged from the 1/2 Real to the 8 Reales…. Most of the very few specimens of the 4 Reales denomination seen by the cataloguer are all in miserable shape being sea-salvaged, with the present coin being the finest by a rather comfortable margin. Although the (1655) date is not present [no dated 1655 4 reales exist], the “C” mint mark and “S” assayer initial (for Salvador de Caceres) are fully visible to the right of the shield. As the finest known of an important and rare one year-type issue, the offering of the present specimen should attract serious interest.”

Uncertified and without the benefit of a proper population study, this 1655 Cartagena four reales realized $7,344 in the Heritage sale. 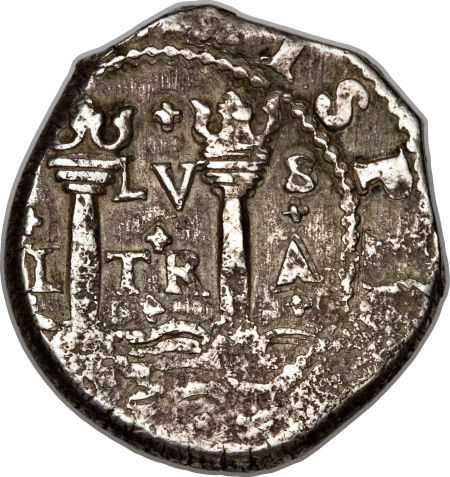